Suzanne is a professional genealogist with over 20 years of family history research experience. She has taught Beginning Genealogy classes at Southern Illinois University at Edwardsville since 2018. In addition to being a genealogist, Suzanne is also a gem dealer, performer, artist, event specialist, writer, and singer. Suzanne currently lives in the St. Louis area with her four sons. She spends her free time solving nonograms (logic art puzzles), doing and creating crossword puzzles, and geocaching (where she has occasionally combined two favorite hobbies by looking up the family histories of names on headstones in cemeteries while geocaching!).

Picture it, Oregon, 1985: A young girl, gaga over Princess Diana and intrigued by royalty, is told by her father than she is descended from “The Duchess of Holland,” and given a rudimentary family tree tracing that line back. And thus was born a love of family history.

I started with that basic tree as a teenager, longing to pinpoint my (alleged) royal lines. I finally got into genealogy research in a big way when I got a subscription to the biggest family history site online. Having been given that family tree by my father and also another by my mother (whose own mother was an avid genealogy researcher and who did it the old school way–by writing to county offices and long-lost cousins to get the info!), I had a good start. Very quickly I was able to fill in many branches, due to the ease and availability of online family trees. However, the brick walls were what most intrigued me. After lots of practice (and lots of discarding of bad habits), I started to break through these walls, and in time became an expert genealogist.

At some point I realized that I could only go so far with my own tree with the available resources, and decided to do it for others, and Lazy-B Genealogy was created. I found that many people are in similar situations, where they have built a good tree based on the research of other people, but need an expert to fill in the blanks, so I became that expert for them.

Eventually I realized that many people could learn to do their own research by breaking out of the same bad habits that had initially held me back. I contacted the local university and offered my services as an instructor, and a class was born! Over several years, I developed a solid 6-session course that teaches people how to be better genealogists on their own, without relying on other people’s online trees. And now I am thrilled to be offering this class to a wider audience.

(Oh, and a little post-script to my opening story. It turns out that I am not descended from “The Duchess of Holland” after all. I am descended from an ordinary Dutch woman who died in a cholera epidemic and didn’t have even a trace of royal blood. Be careful what you wish for.) 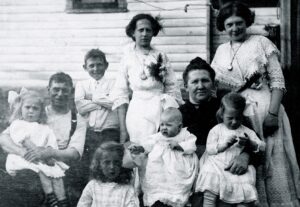