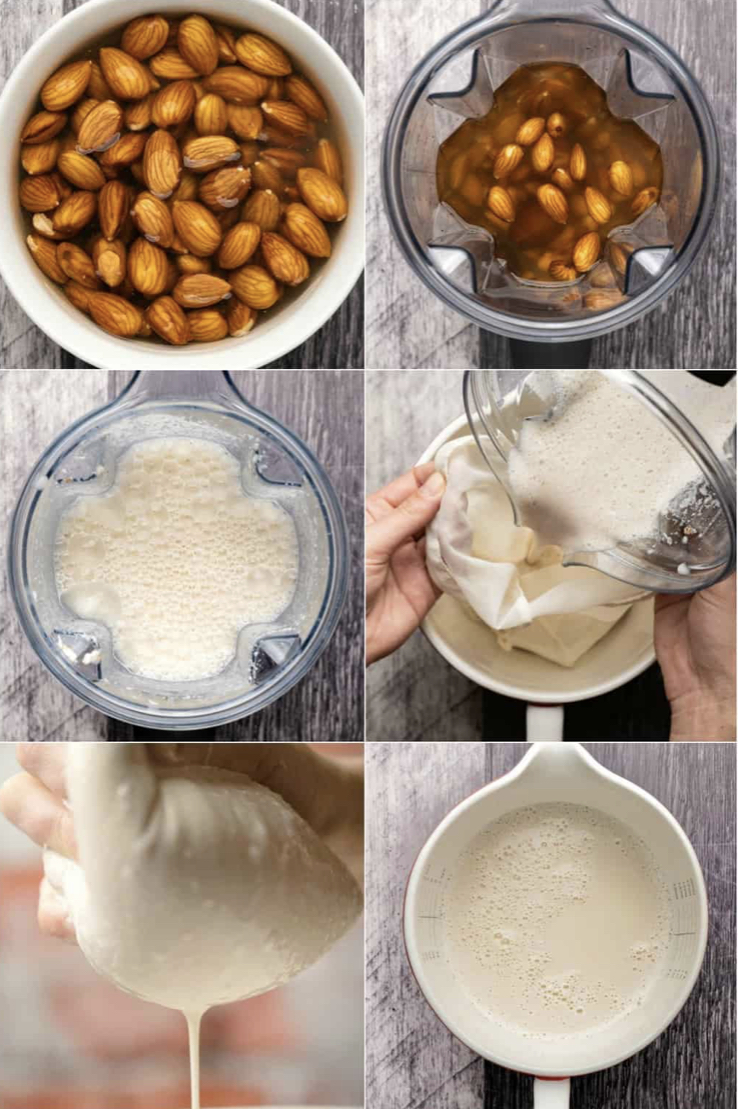 If there is a desire to make almond milk during the class, the supplies needed are:
1 cup of RAW Organic Almonds
5 cups of filtered water
1 pinch of salt
1 nut milk bag or cheese cloth
1 powerful blender (vitamix) (Blendtec)
Ingredients for variations discussed in class.

What are some of the benefits of Almond Milk?

1. Almond milk is ALIVE with Food Enzymes
Food enzymes occur in raw food and aid in digestion. Drinking raw almond milk allows the food enzymes in the almonds to digest the milk. Store bought milk, almond or otherwise, are pasteurized which kills the food enzymes in the almond milk or in dairy, forcing the body to use it’s enzymes for digestion.
2. Almond milk is dairy-free and low in calories
Almond milk is a low-calorie beverage, containing just 39 calories per cup, about half of that in a cup of skim cow’s milk. This makes it a healthy choice for those people who are trying to reduce their calorie intake or lose weight. However, it is important to choose varieties that are unsweetened, as some sweetened and flavoured versions are higher in calories. Additionally, almond milk is naturally dairy-free as it is made from water and almonds. This makes it a great option for those people who follow a vegan diet, or those who are intolerant or allergic to lactose or dairy.
3. Almond milk will not spike blood sugar levels
Unsweetened almond milk has no added sugar and contains just 3.5 grams of carbohydrates per cup, compared to cow’s milk, which typically contains around 12 grams per cup. Relative to this, almond milk is high in healthful fats (around 3 grams per cup), which means it should not raise blood sugar levels, which may suit people with diabetes,
4. Almond milk contains powerful antioxidants
Almonds are a natural source of vitamin E, and one cup of almond milk provides 110 per cent of the recommended daily vitamin E intake. Vitamin E is a powerful antioxidant that protects polyunsaturated fatty acids from oxidation, and may reduce the risk of several diseases, including heart disease and some types of cancers.
5. Almond milk can support bone health
When you reduce your dairy intake, you run the risk of running low on calcium, which is essential for bone health. However, some almond milks are fortified with calcium, with around 480mg per cup. The daily recommended allowance is 700mg.
6. Almond milk is high in vitamin D
Vitamin D, also known as the “sunshine vitamin”, has several important functions in the body, including maintaining bone health, supporting your immune system and regulating cell growth. Approximately one billion people across the world have vitamin D deficiency, and this is only set to rise as lockdown restrictions associated with COVID-19 continue. However, some brands of almond milk are fortified with vitamin D.
7. Almond milk may support a healthy nervous system
Vegans and vegetarians can be at risk of vitamin B12 deficiency. Vitamin B12 is essential for energy, nerve function and cell formation. Almond milk may be fortified with the same level of vitamin B12 as cow’s milk.
8. Almond milk is low in phosphorus
Almond milk contains low levels of phosphorus (24mg per cup) and moderate amounts of potassium (176mg per cup), compared to soy milk and regular milk. This may make almond milk a suitable alternative for people with chronic kidney disease, who are unable to clear these nutrients properly. However, it is best to check with a medical professional first.
9. Almond milk is low in saturated fat
Almond milk is low in saturated fat compared to regular milk, making it a healthy choice for those people worried about their calorie intake or cholesterol levels. It also contains 1.3 grams of healthful unsaturated fat of almonds, which may reduce the risk of heart disease.

10. Almond milk is easy to add to your diet
Almond is incredibly easy to add to your everyday diet, here are some ideas:
Enjoy it as a refreshing drink
Use it in smoothies
Have with porridge, muesli or cereal
Make hot drinks, such as hot chocolate or coffee lattes
Use in baking, such as banana bread or muffins
Use in cooking, such as soups, curries or stir-fries
Make home-made yogurt or ice-cream

How long does homemade almond milk last in the refrigerator.

I find that on average, homemade almond milk lasts 4-5 days with refrigeration. If it becomes sour before then, make sure to fully sterilize your equipment before use by running it through the dishwasher or pouring boiling water in your jars.

How many grams of protein are in homemade almond milk.

Homemade almond milk can have up to 6 grams of protein per serving.